From the Rockmine Almanac for today (Thursday 3rd July):

1999. Mark Sandman, lead singer and bass player of Morphine collapses onstage at a rock festival in Palestrina, about 30 miles east of Rome, Italy. The 46 year old could not be revived and was pronounced dead in the ambulance enroute to a nearby hospital. It’s thought he suffered a heart attack.

1975. Chuck Negron (Three Dog Night) is arrested for possession of cocaine in his hotel room in Louisville, Kentucky on the first night of the band’s tour. Charges are eventually dropped in October when a court decides that the warrant used in the bust was granted on a basis of “unfounded information”.

1978. Keith Moon is taken off a plane at Mauritius just before it was due to fly to London. The captain of the British Airways flight felt that the drummer was unfit to travel and referred him to the airline’s resident doctor who admitted him to hospital where he is detained overnight. It’s thought the illness was a reaction to sleeping pills taken before the flight.

1985. Shelley Preston steps into the limelight on the BBC-1’s “Wogan” show as the new member of Bucks Fizz. The 21 year old was chosen from more than 1,000 hopefuls who auditioned as replacements for Jay Aston last month.

a) Jim has a heart attack in the bath in his appartment at 17 Rue Beautreillis (pictured above) and dies.
b) Jim overdoses while out boozing in a nightclub or brothel.
c) Jim never dies but uses the story as a means of bowing out of public life and an impending jail sentence.

The Doors say they were sick of rumours about his death so they didn’t respond as quickly as they might have to yet another story regarding his demise. By the time Bill Siddons was sent by the band it was too late to see the body. All we’ve got is Pamela’s word that it was Jim in the coffin. Unfortunately she’s not around to question; or is she? Anyway, the closest we can get to finding out what did happen is to check out Pamela Courson’s statement to the Paris police: 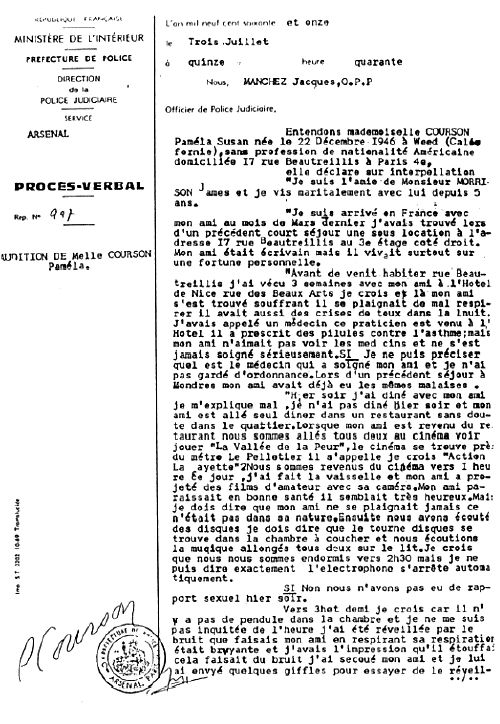