From the Rockmine Almanac for today (Monday 7th July): 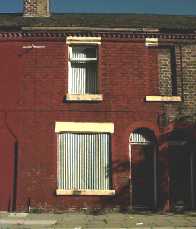 1940. Ringo Starr born Richard Starkey at 9, Madryn Street, Dingle, Liverpool, England. The house, pictured above, was once sold at a Beatles auction during one of Liverpool’s famous Beatles weekends for £ 15,000. I’m sure at the time I took this photo, which was several years after the sale, it was scheduled for demolition to make way for new affordable housing. Any comments about its current status would be much appreciated.

1954. Sam Phillips gives local Memphis DJ, Dewey Phillips (no relation) an acetate recording of “That’s All Right (Mama)” cut by Elvis Presley at Sun Studios on July 5th. Sam asks Dewey to play it on his “Red, Hot And Blue” show which he does. Within minutes the phone lines are buzzing. Dewey is forced to play the track 14 times and locate its singer (out at a movie at the Suzore Cinema with some friends) for his first ever interview. [Elvis: “Mr. Phillips, I don’t know nothing’ about being interviewed”. Phillips: “Just don’t say nothin’ dirty”].

2000. Eminem appears in the 44th District Court in Auburn Hills for a preliminary hearing. The rapper faces charges relating to weapons possession which stem from a fight with an Insane Clown Posse employee at a car audio store in Royal Oak, Michigan.

Later in the day in an unconnected incident, emergency services are called to Eminem’s home in Sterling Heights, Michigan, where his wife, Kimberly Mathers, is found to have attempted suicide by slashing her wrists. Kimberley was taken to nearby Mt. Clemens General Hospital for evaluation but released the next day. A press release issued by Sterling Heights Police Department, said that emergency personnel were called to the scene around 11.30 pm. Mathers, who was conscious when they arrived, was treated for her injuries at the scene before being transferred to hospital. Eminem was not at home at the time of the incident.

1967. Brian Jones of The Rolling Stones collapses at the Hilton Hotel in London. He’s taken to the Priory Nursing Home in Roehampton suffering from strain and exhaustion. A spokesman for the group said, “We have been asked to request that the press do not seek to find the whereabouts of Mr. Jones as it may well impede his recovery”. Brian is placed under the care of psychiatrist Dr. Anthony Flood. Dr. Flood will continue to see him on a regular basis even after he leaves the Priory.

1993. Mia Zapata (The Gits) is found raped and strangled to death in Seattle, aged 27. She had left friends in the city’s Comet Tavern at approx 2 a.m. to walk to a friend’s flat a few streets away. Her body was found on the sidewalk little more than an hour later. Police believe she had been killed elsewhere and then dumped from a car.