From the Rockmine Almanac for today (Tuesday 5th August):

1973. The Rolling Stones‘ producer, Jimmy Miller suffers the loss of at least £ 75,000 of studio gear when the Mercer Arts Center in New York (which houses Jimmy Miller Productions) collapses into a pile of rubble. The hotel next door collapses at the same time and although two people are killed, recent Rolling Stones Records signing, Kracker, who are staying there, escape unhurt.

1983. David Crosby is sentenced to five years in jail by Judge Pat McDowell in Dallas, Texas after being found guilty of possessing cocaine and carrying a gun into a bar. His lawyers lodge an instant appeal and he is released on bail.

1965. Where The Action Is (U.S.A.) The Byrds; Jewel Akens; Linda Scott; Steve Alaimo. Here are The Byrds with “All I Really Want To Do”. 2m 02s. The quality of this clip is probably the poorest I’ve ever included but its a real rarity.
Death

1978. Pete Meadon, The Who‘s first manager and writer of “Zoot Suit” dies of barbiturate poisoning at his parents’ home in London.

Regular readers will know I’ve been struggling since April to stage a rock and pop memorabilia exhibition at the Red Shoes Theatre in Elgin. In the 1960s it was one of Scotland’s busiest and best known venues for the hundreds of bands who constantly toured the U.K. The Beatles, The Who and Pink Floyd were among the star names that played there. I was in Elgin yesterday, fully intending to have one last go at rescuing the exhibition but ended up driving another half hour west to Nairn.

Nairn was home to another venue run by Albert Bonici, the Elgin promoter who’d put The Fabs and all the others on. The Ballerina Ballroom (as it was then called), which played host to The Who, Cream, Pink Floyd et al., has lain empty for years until recently when Nairn based Hollywood actress, Tilda Swinton decided to re-open the venue and stage a film festival there. The Ballerina Ballroom Cinema Of Dreams festival lasts 8 1/2 days, starting August 15th.

It was easy to find, driving off the main road to Edinburgh, turning left for the town centre and straight into the High Street. A few hundred yards later, I passed it. I found a parking space and walked back. The doors weren’t locked, so I just walked in. There I found Tilda’s husband, the artist and playwright, John Byrne. I explained my troubles with the Ballerina’s sister venue and he instantly showed me a huge ante-room off the main ballroom with large unobstructed walls and agreed it was a great idea and a perfect adjunct to the film festival. 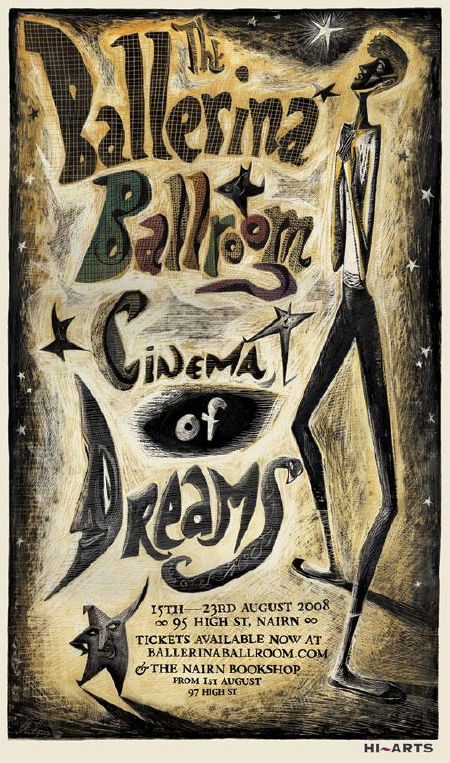 So, now I’ve got 10 days to promote and create the exhibition. I’m heading back to the ballroom this morning with some of the pieces I’m planning to hang and get some images for tomorrow’s blog. My plan is to replicate the real exhibition with a virtual version online. Sadly, I’d spent a lot of time researching the bands who played the Two Red Shoes and now I’m going to have to redo that for the Ballerina. I loved the idea of boards with gig adverts, reviews and listings to spark the memories of those who’d attended them.

Anyway, enough of what’s to be done. I love ferreting through old newspapers, so I can’t complain. Click on the film festival link above for full details. For some background to the festival, there’s a really great article from The Independent dated July 23rd here.