Baby boomers, Beatles, Culture, Diary, Entertainment, John Lennon, Journal, Life, Media, Music, Music news, Nostalgia, Pop, Pop Music, Random, Rock music, The Beatles, Today In Music, Today in music history, Uncategorized
Leave a comment
From the Rockmine Almanac for today (Monday 24th March):
Birth
On Tour
1989. Elton John collapses onstage in front of 16,000 fans at Paris’ Bercy Stadium. A doctor is called and after a few minutes break, Elton continues the gig. The cause is later announced as a sudden drop of blood pressure in the oppressive heat.
In Custody
1998. Curve‘s new drummer Steven Spring is arrested on arrival at Newark Airport, New Jersey for disorderly conduct. He is reported to have become aggressive and offensive after drinking heavily on the flight from London and was eventually restrained with plastic handcuffs. He will be held by police until the afternoon of the 26th when he will be charged. Meanwhile, the band have had to recruit Steve Monty as a stand-in for the first date of their U.S. tour.
In Court
1973. Judge Ira Fieldsteel rules that John Lennon has 60 days to leave the U.S.A. or face deportation. Lennon appeals.
On Television
1996. Taratata (France 4, France) No. 119. Recorded: 23 février 1996. Solos: Bon Jovi; The Roadrunners; Willy De Ville. Duos: Bon Jovi & Willy De Ville; Bon Jovi & Bob Geldoff.
Death
1995. Andre Andre, Maurice Truffaut (both I Dream Of Wires), Brian Hurley and Brock Vond (both Monophone) are killed in a coach crash on their way to a New Romantic festival in Albania. Three members of the group Bret are airlifted to hospital in Palermo where they are described as “critical”.
Music Paper From Today 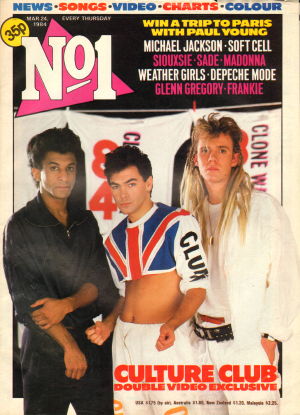 No. 1 from 24th March 1984. A copy taken from Rockmine’s almost complete run of U.K. music papers from the last 45 years.
Go to Rockmine’s main site here.
© Copyright 1995 – 2008 Rockmine Archives. Use of this content is prohibited unless licensed by Rockmine Archives.